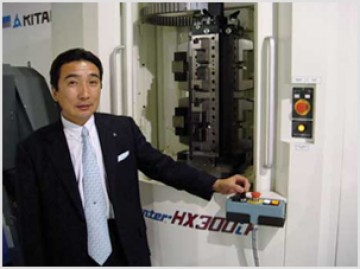 
Dr. Kitamura sets the strategic direction for research and development that has resulted in the company receiving more than 300 patents and patents pending in precision machining design. Dr. Kitamura is also responsible for setting the vision behind the company motto, "Limitless Creativity," which underscores Kitamura's commitment to consistent product development that produces the most technologically advanced and reliable machining centers in the world.


He has elevated the company's machining centers to new levels of quality, precision, and performance by combining leading-edge research and technology with hands-on attention to detail and craftsmanship. Awarded both a Bachelors and a Masters degree in Mechanical Engineering from Nihon University in Chiyoda-ku, Tokyo, Dr. Kitamura received his Doctorate of Philosophy in Engineering from Osaka University In March 2008 and is currently serving as an Affiliate Professor of Mechanical Engineering at Chubu University.